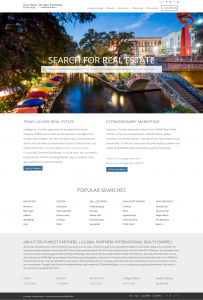 This project has been a real test for our WordPress Real Estate Plugin and our Multi Rets Data Merge capabilities. We’re calling it “the Mother of All Data Feed Projects.” Several month’s ago, this client approached us with a request for a site build-out that merged 5 major market RETS feeds across Texas into a single database. In addition, they wanted to incorporate some slick statistical information for communities, neighborhoods, areas of interest and more. They also wanted to incorporate sold data, which is only available from a couple of the RETS providers. They are a unique brokerage who obviously handles transactions statewide. They have agents statewide working from virtual offices so they needed WordPress MU capabilities as well along with Agent Site Templates so their agents can have their own sites with all of the aforementioned features. And to top it all off, they were looking for an alternative to a Real Estate Webmasters site they had seen (plus the merged data feed and other extras) for a price they could actually afford.

We’re not going to lie, it’s been a bear. A long haul…several months to be exact, a bit stressful, some high emotions, and a ridiculous amount of coffee. In order for this site to run smoothly and efficiently, it had to be built on our 4x version…which was still under development so the project took much longer than it would have if our 4x version had already been complete. It has now been about 5 months since we received their RETS credentials from all of the markets and we can finally see the light at the end of the tunnel. 4x is almost out of beta. Data feeds are merged. Statistical data can be displayed using polygon map draw tools and our customized shortcode. Programmers are tweaking the customized map search and we are looking forward to a final punch list soon. We’re anxious to see the final project and looking forward to showing off some of the exciting new, custom features.

Want to join the discussion?
Feel free to contribute!

NAR is now concerned about “an even playing field for all real estate...